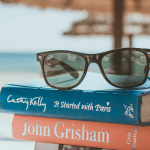 The Sway team is always reading a wide variety of book genres, but there is something about the lazy, hazy days of summer that really has the team buzzing about the best books of the season that we want to share for your summer reading list.

Pull out your TBR (To Be Read) list and prepare to add a few good potential reads to it. If your reading list is anything like ours, it’s probably never-ending!

The Care and Feeding of Ravenously Hungry Girls – Anissa Gray

The Butler family has had their share of trials—as sisters Althea, Viola, and Lillian can attest—but nothing prepared them for the literal trial that will upend their lives.

Althea, the eldest sister and substitute matriarch, is a force to be reckoned with and her younger sisters have alternately appreciated and chafed at her strong will. They are as stunned as the rest of the small community when she and her husband, Proctor, are arrested, and in a heartbeat the family goes from one of the most respected in town to utter disgrace. The worst part is, not even her sisters are sure exactly what happened.

Among the most celebrated and beloved novels of recent times, Cloud Cuckoo Land is a triumph of imagination and compassion, a soaring story about children on the cusp of adulthood in worlds in peril, who find resilience, hope, and a book.

In the 15th century, an orphan named Anna lives inside the formidable walls of Constantinople. She learns to read, and in this ancient city, famous for its libraries, she finds what might be the last copy of a centuries-old book, the story of Aethon, who longs to be turned into a bird so that he can fly to a utopian paradise in the sky. Outside the walls is Omeir, a village boy, conscripted with his beloved oxen into the army that will lay siege to the city. His path and Anna’s will cross.

Lowen Ashleigh is a struggling writer on the brink of financial ruin when she accepts the job offer of a lifetime. Jeremy Crawford, husband of bestselling author Verity Crawford, has hired Lowen to complete the remaining books in a successful series his injured wife is unable to finish.

Lowen arrives at the Crawford home, ready to sort through years of Verity’s notes and outlines, hoping to find enough material to get her started. What Lowen doesn’t expect to uncover in the chaotic office is an unfinished autobiography Verity never intended for anyone to read. Page after page of bone-chilling admissions, including Verity’s recollection of the night her family was forever altered.

“Ray Carney was only slightly bent when it came to being crooked…” To his customers and neighbors on 125th street, Carney is an upstanding salesman of reasonably priced furniture, making a decent life for himself and his family. He and his wife Elizabeth are expecting their second child, and if her parents on Striver’s Row don’t approve of him or their cramped apartment across from the subway tracks, it’s still home.

Few people know he descends from a line of uptown hoods and crooks, and that his façade of normalcy has more than a few cracks in it. Cracks that are getting bigger all the time.

Let’s Not Do that Again – Grant Grinder

Nancy Harrison is running for Senate, and she’s going to win, goddamnit. Not that that’s her slogan, although it could be. She’s said all the right things. Passed all the right legislation. Chapped her lips kissing babies. There’s just one problem: her grown children.

Greta and Nick Harrison are adrift. Nick is floundering in his attempts to write a musical about the life of Joan Didion (called Hello to All That!). And then there’s his little sister Greta. Smart, pretty, and completely unmotivated, allowing her life to pass her by like the shoppers at the Apple store where she works.

Chemist Elizabeth Zott is not your average woman. In fact, Elizabeth Zott would be the first to point out that there is no such thing as an average woman. But it’s the early 1960s and her all-male team at Hastings Research Institute takes a very unscientific view of equality. Except for one: Calvin Evans; the lonely, brilliant, Nobel–prize nominated grudge-holder who falls in love with—of all things—her mind. True chemistry results.

But like science, life is unpredictable. Which is why a few years later Elizabeth Zott finds herself not only a single mother, but the reluctant star of America’s most beloved cooking show Supper at Six. Elizabeth’s unusual approach to cooking (“combine one tablespoon acetic acid with a pinch of sodium chloride”) proves revolutionary. But as her following grows, not everyone is happy. Because as it turns out, Elizabeth Zott isn’t just teaching women to cook. She’s daring them to change the status quo.

What the Fireflies Knew – Kai Harris

An ode to Black girlhood and adolescence as seen through KB’s eyes, What the Fireflies Knew follows KB after her father dies of an overdose and the debts incurred from his addiction cause the loss of the family home in Detroit. Soon thereafter, KB and her teenage sister, Nia, are sent by their overwhelmed mother to live with their estranged grandfather in Lansing, Michigan. Over the course of a single sweltering summer, KB attempts to navigate a world that has turned upside down.

What My Bones Know – Stephanie Foo

By age 30, Stephanie Foo was successful on paper: She had her dream job as an award-winning radio producer at This American Life and a loving boyfriend. But behind her office door, she was having panic attacks and sobbing at her desk every morning. After years of questioning what was wrong with herself, she was diagnosed with complex PTSD – a condition that occurs when trauma happens continuously, over the course of years.

Both of Foo’s parents abandoned her when she was a teenager, after years of physical and verbal abuse and neglect. She thought she’d moved on, but her new diagnosis illuminated the way her past continued to threaten her health, relationships, and career. She found limited resources to help her, so Foo set out to heal herself, and to map her experiences onto the scarce literature about C-PTSD.

Red at the Bone – Jaqueline Woodson

Two families from different social classes are joined together by an unexpected pregnancy and the child that it produces. Moving forward and backward in time, with the power of poetry and the emotional richness of a narrative 10 times its length, Jacqueline Woodson’s extraordinary new novel uncovers the role that history and community have played in the experiences, decisions, and relationships of these families, and in the life of this child.

Looking for more good books? Check out all of our lists of the best books to read!

Previous Post: « Grillin’ & Chillin’ Summer Playlist
Next Post: Google Analytics 4 Is Here: Why You Need To Update Now (And How You Do It) »